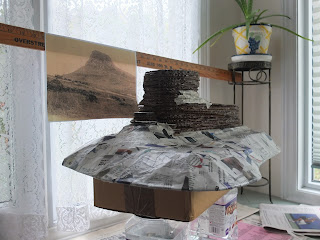 Isandlwana... a W.I.P.
So, the Mod Podge Mache continues. I've got about three coats on I reckon, or close to it. I'm using Mod Podge - the "water-based glue, sealer and finish" by PLAID - instead of traditional paper mache. It seems to work fine, despite the "4 week cure time" mentioned on the tub. I just started my second 32 fl ox (946 ml) tub last night. So, between the amaTushane kopje, a few Zulu bases and this, that is how much paper mache I've done. The latest work has been to go around the edge and cover the base cardboard. I don't think I'm going to do underneath, though it might make it stronger if I did. (hmm...)
I've also been scrutinizing what photos I can find of Isandlwana before I tackle the upper bit; I didn't want to just go from a "mind's eye" impression. Unfortunately the period photos all seem to be from the same angle, or close to it. I'll just have to keep in mind that the more detailed modern photos reflect 140 years or so of wind and rain erosion.
The plan is to cut the upper part down, both with vertical crevasses and possibly to shave a bit off the bulk. When I built it up I just sort of "winged it" and I might have over did it slightly. I'm away on the weekend so I'm not going to get back to it until late next week, but at least it'll be well dried by then.
Posted by phf at 1:26 PM