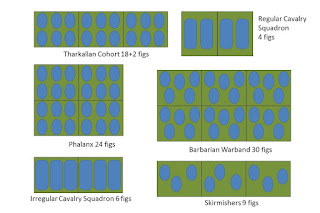 Unit Bases (i.e. one figure = multiple persons)
OK, more-or-less final basing ideas:
1) Units get square or rectangular bases;
2) Single entities get round or oval bases;
3) Regular units are based with an even number of figures;
4) Irregular units are based with an odd number of figures;
5) My standard base is 4" x 5".
I have an idea that a phalanx sub-unit might be four bases, as above, but with the front edge being 4", not 5". So each base would be two figures wide by three deep, with the whole sub unit being four figures wide by six figures deep. Perhaps in this configuration it would have six bases instead of four, arrayed three wide by two deep.
More later...
Posted by phf at 7:15 PM