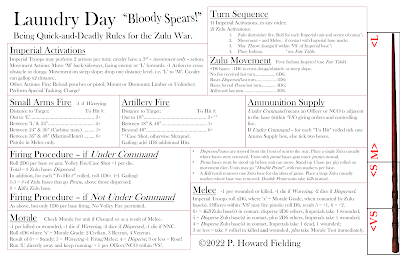 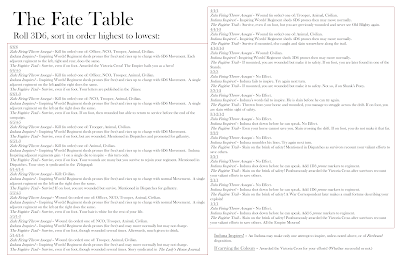 Page 2
This is the most recent version of my "Quick-and-Deadly" Zulu War rules: Laundry Day - "Bloody Spears" edition. Note that under these rules the players are intended to take the role of Imperial Officers, while the Zulus are controlled by the referee. That said, I intend to make the British players make all the Zulu die rolls themselves; I'll just move the bases and deploy the Induna as necessary.
Zulu movement is pretty much pre-programmed by the actual events of the battle and so there is little referee input required anyway, except for the question of when to employ the "Induna Inspiration" rules. Each wing of the Impi, and also each regiment, has 1 or more Induna, who function as "Fate Points" to try and inspire the pinned down regiments to action. The Induna is placed on the table the turn before it is used. The following turn during movement, and as a regiment is being activated, the roll is made on the Fate Table to determine how successful the Induna is at inspiring the unit.
Posted by phf at 2:11 PM