Lohwand: Rivers of the Northlands 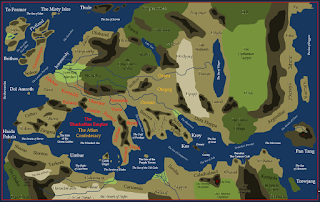 The Northlands
I only show eleven rivers in the entire Northlands, eight of them on the northern continent. There are, of course, many others too small to show at this scale - and as yet undiscovered for the most part, as I haven't developed much detail! I have added a few in the Tharkallan Heartlands Provinces as I develop them, and also a few large lakes as well.
Here are the names of the large rivers shown on the northern continent: 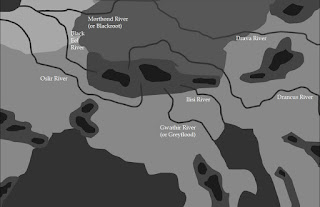 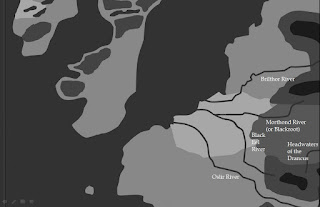 You might recognize some of the names! My usual sources: Middle Earth, Conan, Glorantha. The Drancus and the Drava are a tribute to the Albertine imagination campaign profiled in "Wargamer's Digest" articles over 40 years ago. The Ilisi river I think I actually came up with myself! ;-)
Posted by phf at 2:13 PM