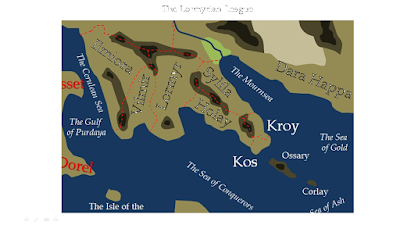 This region is intended to be my Greek City State/Trojan War area. I had thought initially that I would call it the Ilmioran League, but then I remembered that I should let the stats determine that: 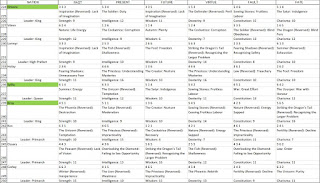 Looking at these I decided that Lormyr was a better choice for the head of the League. Ilmiora has "lack of imagination" for both past and future which doesn't say "leadership" to me. However, "Duty" for the present implies that they might back a league with perhaps Lormyr at its head. Lormyr also has "lack of imagination" for the past, and "shallowness" for the present, but its virtue is "Recognizing the Larger Problem" - which in my mind is Tharkallan aggression, so that puts them on top, IMO.

I should note that when thinking things out I had already decided that Nemedia was the first of these city states to fall under the Tharkallan yolk. So there is a threat, even if it is not immediate.

The green highlighted areas are ones where the results imply possible conflict. In the case of Ilmiora I think I highlighted it because of the soldier/duty reference. I've since changed my mind andI don't think that this means Ilmiora is currently at war. There is "peril" as a virtue, which might mean that the Tharkallan conquest of Nemedia has awakened them to the need to do something.

The other two instances are Sylila and Kroy, which are adjacent to each other; you might have already guessed that Kroy is my version of Troy. And - straight up, no fudging by me - "destruction" is part of Kroy's past! And the fault is "energy sapped". Sylila on the other hand, has "war: great effort" as its fault and its past is "energy".

My interpretation is that Sylila and Kroy have recently fought a war, ending with the sack of Kroy, which is now a client state of Sylila. Furthermore, Corlay has a fault of "decline" with "inexperience" in its past and "weakness" as the present, but with "rebirth" as its virtue. So my reading is that Corlay is related somehow to the Krojans and that probably survivors have taken refuge there, hence the rebirth. I am also tempted to also categorize Ossary as a related nation as well, but their stats were so lackluster as to suggest they had first failed to aid the Krojans and then  probably turned any away that showed up at their shores. I do note that Ossary's future is "recognizing the larger problem" so perhaps they will support the league. Sylila's future is "indulgence" which I think means they are riding high after their victory and are likely to give the league short-shrift, even if they do nominally support it; Kroy's future is "nuture", which I take to mean that they are licking their wounds and no doubt plotting their revenge. Their virtue of "ceasing fruitless labour" seems to reinforce this view.